After Spotify announced that you only got 10 hours free listening a month, I went in search of some new and interesting sources of music, and one of the things I stumbled across was the monthly KVR One Synth Challenge. Basically the idea is that you have to create an entire track using a single freeware virtual instrument – a different one each month. Despite this limitation, the quality of submissions is consistently impressive.

Voting is done by the community – you have to list your top five tracks. Each month I would download all the tracks and gradually eliminate them from a playlist, making notes on what I liked about each one as I went. This made me wonder if I could create a simple rating tool in Silverlight to help me do this – storing my comments and ratings, and allowing me to easily eliminate tracks from my shortlist.

So I created a simple application called “MusicRater”. At the moment the paths for each KVR OSC contest are hard-coded and I update it each month to point to the new one, but I have plans to make it more configurable in the future. The application makes use of my Silverlight star rating control. 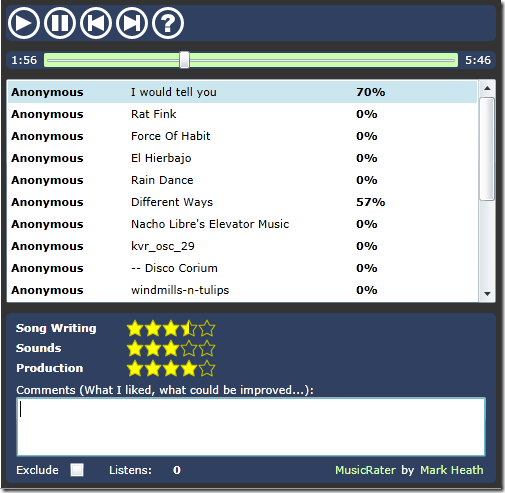 You can try it out here, and install it as an out of browser app if that is convenient for you. As of the time of posting, the version at this address is set up to return the tracks for OSC 29, which uses a synth called String Theory, which poses an interesting challenge to the contestants since it is a physical modelling synth. If you enjoy listening, make sure you head over to the voting thread and cast your votes.