Back in April, I started a series of posts here on how to completely customise the style of a ListBox in Silverlight 2 beta 1, including the scroll-bar styles. That was followed by a rather painful update to Silverlight 2 beta 2 (see Part 1, Part 2, Part 3). Now that Silverlight 2 has officially shipped, the code required one last update. Thankfully the changes were not so great this time. A few deprecated properties needed to be removed from the XAML, and some Duration attributes needed to be changed to GeneratedDuration, but that was about it.

There is some good news. From initial inspection it looks like the scroll-bar bug, where you saw a stretched horizontal scroll-bar behind your vertical scroll-bar has finally been fixed. And first impressions of the XAML preview in Visual Studio are good - you can actually see what it looks like without having to run the project.

What it hasn't fixed is my appalling colour selections and graphical design skills. I might take the time to work a bit more on the appearance of this thing now that I can be sure the syntax isn't going to change yet again. 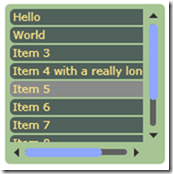 I've uploaded my example project which can be opened in Visual Studio 2008 (with Silverlight Tools) or in Expression Blend 2 SP1. Download it here.