Last week I told the story of how the "entreprogrammers" podcast inspired me to turn one of my ideas for an application into an actual product and make it available for sale. Of course I had no idea how it would actually do, and in the first week I only made one sale. That was pleasing in the sense that I knew that one or two sales a month would effectively cover my costs for web hosting, and also proved that that my shopping cart and license generator both worked. But I was hoping I could improve things. So in this (rather long) post, I'll tell you what happened in my second week.

First, I needed to get some more traffic to my site and thankfully I had one quite good way of doing that. I had made a similar but limited open source application which continues to be extremely popular (still don't really know how!). I simply updated this application to suggest to users that if they wanted to record their calls they should check out the "pro" version, and directed them to my site. The traffic from this route is currently about 75% of my total traffic.

Secondly, I tried to generate a bit of buzz about the application on twitter. I don’t have a particularly big following (about 400 followers) and programmers aren't really my target market, but probably the best thing I did was to give a shout-out to the entreprogrammers. They seemed glad to re-tweet it to their many followers, and it resulted in me reaching the heady heights of about 6 concurrent visitors to the site! Takeaway: a bit of flattery can really pay off if you want people to spread awareness of your product!

My third idea for getting some traffic was to leverage my mailing list. I had made a bit of a mistake in harvesting emails in the year preceding my launch. I didn't do a "double opt-in" (where you get people to verify their email by clicking a link). This meant I couldn't import the 1400 email addresses I had on the list into MailChimp.

So instead I wrote my own script in the awesome LinqPad application to send mails to this list using my own SMTP server. This revealed that just over 10% of the emails in the list were invalid, and I created a special script on my website to serve up an image in the email so I could track open rate. I was sending out in batches of 50 for fear of getting blocked as a spammer, and so I could try alternative ideas as I worked my way through the list. But 300 emails in, and I've not really seen much of a response so far.

I also emailed out to my MailChimp mailing list (the one with proper double opt in subscribers!), which is slowly growing, but currently only at 40 subscribers. Again the open rate wasn't exactly impressive, and I don't think it led to any sales, but at least this list I am allowed to keep emailing, so I have the chance to keep the product in their mind.

Another thing I did during the week, was to actually allow customers to submit the details of any unhandled exceptions they encountered during the running of the application. I needed to know if all the people who were downloading my app were actually having any success running it. The results were interesting (read about what I did here) and I discovered many problems my users were having that could be relatively easily resolved. In fact there are still several issues I need to get fixes out for next week. I suspect that users who see the app crash are much less likely to shell out for a license, so the sooner I can eliminate common causes of error the better.

My heart sank when only my third customer since the site went live contacted the support email to say she couldn’t install the application. Turns out she was getting some kind of weird ClickOnce error (yes I know, I'm supposedly an expert in that now). Thankfully she was very patient while we tried a few troubleshooting steps and eventually we got it working for her. But I suspect I was close to having to issue my first refund.

One of the entreprogrammers, Derick Bailey kindly gave me some advice on my site. He particularly pointed out that visitors could simply download my application without giving their email address. He suggested I should change that, and only offer them the download if they subscribed to my list.

To do that required a bit of learning about the MailChimp API. Unfortunately because I am not on one of their paid tiers yet, I can't create an email that gets auto-sent to new subscribers. So I had to set up a webhook and send out the email with the download link myself when a subscriber was confirmed.

In fact, I currently allow users through to the download page even before they click the confirmation from MailChimp, so technically it is still possible for people to install the app without subscribing to my newsletter. I'm going to see what percentage of people do that, and if it is too high, I'll force everyone to complete the cycle and subscribe before they get the download link.

The second thing I did was a complete website redesign. This was a painful process as HTML and CSS is not my strong suit. I had paid for a nice looking landing page called Ultima from Wrap Bootstrap. The challenge was working out what bits of the gigantic 3000 line CSS file and the dozen or so JavaScript libraries it came with I actually needed. 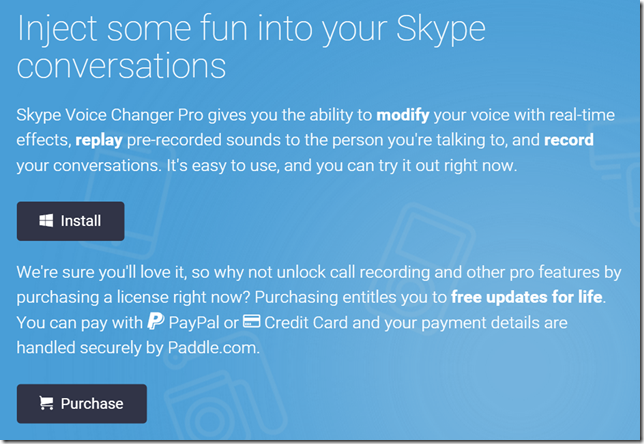 I suspect it has left my site a little bloated in terms of download size, and I'm really hoping it actually still works in all browsers, but I do feel that the site now looks a lot more professional and engaging and hopefully I'll still get a lot of people downloading and installing despite the need to enter your email address.

I also decided that I needed to give Skype Voice Changer a presence on social media. So I created a facebook page, a Google plus page, and a YouTube channel (no videos yet). I've not yet got round to a twitter account. Of course, these are currently virtual ghost towns, but I've added some social media icons to my website, and maybe if I decide to spend some money on advertising at some point I can drive some traffic through facebook, youtube or twitter.

With only one sale in the first week, I was concerned that I had overpriced my app. I was charging $50/£30 and asking for VAT on top. Other similar Skype utilities seemed to be priced at around $30. So I decided to make the quoted price inclusive of VAT, and run a month long "launch sale" at 40% off. I thought that this might allow me to create a sense of "urgency", particularly towards the end of the month, by encouraging people to buy before the sale ends. As it is, it is rather too easy for them just to try the app out and then forget about it. What difference did my new pricing strategy make to sales? Well nearly there, read on to find out.

I've had Google Analytics running in the background for much of the last week. It's fascinating how much information this tool gathers. The number of "sessions" has been artificially bloated by the number of times I've visited the site myself during development, but according to Google Analytics, I have nearly 100 different people visiting the site a day, which I'm hoping isn’t too bad for a two week old product (not really sure what I'm supposed to be expecting at this stage).

Finally, we're onto the bit we've been waiting for. How many did I sell in my second week? Well, I did improve on the one sale from the first week. There was a moment of excitement early in the week when I made two sales in quick succession. But sales came in at a rate of just under one a day and by the end of the week I had sold six. This was a fairly encouraging rate, and if I can keep it up will mean I comfortably cover my costs. Interestingly, including VAT in the price has not impacted my earnings at all, since all my customers so far have been from outside the EU (mostly USA, with one sale each in Canada, Australia and Brazil).

Well although one sale a day isn’t too shoddy, I don’t think it's quite time to put my feet up and abandon this project as a source of "passive income". First of all I need to fix more of the bugs that my users are reporting. This should mean more people have a smooth first experience with the product.

I know I also need to improve the nag screen within the app, so that people who keep using it get regularly promoted to purchase a license, rather than the current half-hearted attempt that is in there.

I'm fairly happy with the overall content on my website now, but I do think I need to create at least one video, to show off the application's features and teach how to use it.

And finally, I'm a little paranoid now that with all the extra JavaScript in the site from the template I bought, maybe some visitors are getting JavaScript errors that are preventing them from being able to use the paddle.com payment form. So I'd like to investigate a way of making that part of the site bullet-proof, so that whatever happens in the page load, the purchase link will always work.

Well done if you managed to read all that to the end! My goal for next week is to improve on the six sales I achieved last week. I'll let you know how I get on, and do let me know in the comments how you're getting on with your own personal entrepreneurial projects!